Yaakov Ben Yehoshua is a unique new voice in contemplative Judeo-Christian literature. His debut title; My Father's Room, is an insightful journey through parable and poetry, toward the heart of God. Yaakov's Jewish heritage and strong faith in Yeshua (Jesus), provide the platform for an authentic, conversational writing style, driven by a holistic faith perspective. The stories are both delightful and challenging, the poetry, inspiring. This thoughtful devotional work is a must read!
BUY "MY FATHER'S ROOM" PAPERBACK

Do Less, Be More by Yaakov Ben Yehoshua

In both the Christian and Jewish faiths, the person who says we should do less is often labeled a comfort seeker. Despite our best efforts to teach the grace of God and the relational focus of our spirituality, we often fall back into the trap of believing our good deeds will somehow win us God's favour.

The Scriptures tell us that all our righteous doing is like used tampons (Yeshayahu/Isaiah 64:6). Why then do we persist in the pursuit of works above faith? DO LESS BE MORE examines the unity of faith and works within the context and mystery of being. From both theological and philosophical points of reference, ​Yaakov Ben Yehoshua expounds upon the central theme of Messianic faith, concluding that being with God is not the same as being in Him.
BUY "DO LESS BE MORE" PAPERBACK
BUY "WORDS" PAPERBACK 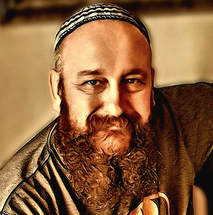 Yaakov ben Yehoshua, born July of 1971, is a Messiah following Jew with a passion for sharing his faith in Messiah Yeshua (Jesus). He is the founding Spiritual Leader of the Beit Melekh (House of a King) Messiah Following Jewish Congregation, Auckland and lives in New Zealand with his wife and two daughters. Yaakov is an active member of his local Christian community, where he teaches the Jewish roots of the Christian faith.

Yaakov spent six years between 2002 and 2008 with congregation B’nai Chayim in Alberta Canada where he was a Cantor of Hebrew liturgy and expounded D’var Torah under the tutelage of Rabbi Michael Terret (Mishael ben Yochanan). He began writing in 1999 during a time of renewed interest in his Jewish roots and has subsequently written a number of observations on the Scriptures from a Jewish perspective. He has also composed numerous songs and authored liturgical poetry for use in personal and corporate prayer.